The science, says Ben Kirtman, is absolute. The earth is warming, and this is not a good thing. Polar ice is melting. Sea levels are rising. The world is hotter, and extreme weather patterns are becoming the norm.

The December 2015 accord at the climate change summit in Paris by 196 nations is heralded as a giant leap forward in combating greenhouse gas emissions. Many hope it is not too little, too late.

Because, as Kirtman says, the earth is changing.

Kirtman is a professor at the University of Miami’s Rosenstiel School of Marine and Atmospheric Science and was co-chair of the NOAA Climate Prediction Task Force. He was a lead author of the latest report by the Intergovernmental Panel on Climate Change used during the Paris summit to achieve the unprecedented unanimous agreement.

To many living in South Florida, climate change is personal. As Provost Thomas J. LeBlanc told hundreds of scientists visiting the University in November 2015 prior to the Paris summit, Miami is “ground zero” for climate change and sea level rise. Even as far back as the 1950s, some scientists talked about rising seas inundating the Mississippi Valley and putting Miami underwater.

The University of Miami is marshaling the collective problem-solving muscle of all its schools and colleges to help answer a mosaic of complex questions about the science of climate change. Researchers, engineers, architects, marine scientists, and geologists are exploring new technologies and new ways to live in this changing world. Educators are reaching out to local schools to share the latest science with young learners, the next line of defense against climate change.

Much is known, and much remains to be discovered about the changing climate.

“No longer can we, as a society,” says University of Miami President Julio Frenk, “disregard its impact on the world around us.”

Schools and colleges at UM are looking at ways for communities to adapt to rising seas, and be smarter about sustainability and how we live … END_OF_DOCUMENT_TOKEN_TO_BE_REPLACED

A host of issues, such as socialization and visceral response, help shape our opinions on what are the true impacts of climate change. … END_OF_DOCUMENT_TOKEN_TO_BE_REPLACED

The discussions around global warming and climate change have been ongoing for decades, and with it, a growing list of terms used to explain the causes, changes, … END_OF_DOCUMENT_TOKEN_TO_BE_REPLACED

Your Haiku to the Environment

Through the centuries, poetry has been viewed as a powerful medium to convey powerful messages. Create your own haiku about the environment.

What is Your Carbon Footprint?

Use this calculator from the U.S. Environmental Protection Agency to determine how much a carbon footprint you and your family create with your daily activities. It measures three areas: home energy, transportation, and waste.

END_OF_DOCUMENT_TOKEN_TO_BE_REPLACED 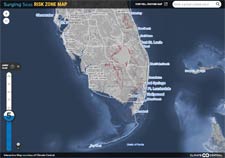 Will your home be under water with 5 feet of sea-level rise? Use Climate Central's Surging Seas Interactive Risk Zone Map to find out.

END_OF_DOCUMENT_TOKEN_TO_BE_REPLACED

What Others are Saying

The Climate Change Special Report, developed over nearly six months by University Communications, showcases the work of scientists, researchers, faculty, students and alumni in the area of climate … END_OF_DOCUMENT_TOKEN_TO_BE_REPLACED