A host of issues, such as socialization and visceral response, help shape our opinions on what are the true impacts of climate change.

Unprecedented climate changes have been occurring since the 1950s, and the latest scientific data shows that sea levels alone will rise as much as six feet by 2100, within the lifespan of today's toddlers.

So why are governments still grappling over issues of policy and politics after all these decades?

The simple answer: It's complicated.

"Just because most climate scientists believe that anthropogenic climate change is happening does not mean that any specific policy action is the 'correct' one," says Joseph Uscinski, associate professor of political science at the College of Arts and Sciences. "Does a carbon tax solve the problem of climate change on its own? Probably not."

Throughout the University of Miami, faculty and students are tackling a spectrum of issues associated with climate change, from energy policy and human perception to economic impact, political ideology, and even conspiracy theory.

To explain how perceptions about climate change are evolving, Uscinski gives an example from growing up in the 1980s.

"There were two things we were taught to fear: nuclear war and the coming Ice Age because of pollution. We were told there would be glaciers and the food supply would dry up. Living in New Hampshire, I believed it was getting colder."

But, he notes, the predictions were far from accurate.

"It's reasonable for people of my generation and older to be skeptical because climate change was not part of our socialization," he says.

Positions on climate change have split down party lines, Uscinski says, not because Republicans don't believe in science and Democrats do, but because we are products of our socialization and information environments.

"Siding with the scientific consensus does not make Democrats necessarily smarter, more accepting of science, or better at evaluating scientific evidence than Republicans," Uscinski says.

"Democrats came to support climate change not because they sat down and confronted the evidence, read the scholarly journals, and evaluated the climate models, but rather because they accepted cues from their elites, which is exactly what Republicans are doing."

But in the case of climate change, because the scientific evidence is too plain for them to refute, the Republican Party has gone the route of conspiracy theory, claiming that the scientists must be corrupt, that it's a partisan plot and all scientists are "lefties," says Uscinski, who presented a paper on this topic last year at the University of Cambridge.

Rejecting scientific consensus is nothing new and "there are just as many conspiracy theories on the left," he adds. But in the case of climate change, because about 40 percent of the U.S. population remains skeptical, it has stymied policies that can address its potentially negative impacts.

UM professor Kenny Broad, director of the Abess Center for Ecosystem Science and Policy, is in a unique position to see what causes some of the differing views in science and policy as it relates to climate change.

"Climate change is often viewed not as scientific fact but as one of several issues that define one's personal ideological position," he says. "This politicization of the issue is exacerbated by special interests that put a lot of money into misinformation campaigns."

A professor in the Department of Marine Ecosystems and Society at the Rosenstiel School of Marine and Atmospheric Science, Broad is an expert cave diver. It's there, in these submerged limestone caves and miles-long narrow passageways undisturbed for millennia, that cave formations provide clues about what the climate has done in the past.

Peter Swart, a professor at the Rosenstiel School's Department of Marine Geosciences, conducts geochemical analyses of the stalagmites from these caves to reconstruct periods of cooling and warming in the past in order to understand the mechanisms controlling current global warming and sea-level rise.

Humans are trial and error learners, says Broad, who was a National Geographic 2011 Explorer of the Year. Climate change, like many environmental issues, is slow, creeping, and largely invisible. It does not evoke the emotional responses that trigger the same instinctual fear response that, say, stumbling upon a rattlesnake or lion in the wild, might.

Broad is collaborating with faculty and students across a variety of academic disciplines to try to make these environmental issues more salient, which should make it easier for new policies to be supported.

"We really need to focus more on what it takes to motivate people—providing rational information alone won't do it," Broad says. "We need the scientific information, but we also need advances in the cognitive sciences and communication fields. It's not going to be another study that coral reefs are in danger or that greenhouse gases are bad that will motivate people. They need to relate the impacts of these changes to the economic, cultural, and moral issues that they care about."

To this end, the Abess Center focuses on interdisciplinary collaborations. It has a unique joint J.D./Ph.D. degree program combining law and science and a forthcoming professional master's program tentatively titled "Media, Science, and Culture."

These and other programs enable students at UM to "tackle these grand challenges of water, overfishing, and climate change" from a legal and environmental science perspective, says Broad.

Even the words used in describing climate change—positive or negative—influence opinion.

"My research examines what people pay attention to in a cluttered environment and how, subsequently, they make choices in a range of contexts," says Milica Mormann, research professor at the School of Business Administration and one of a number of faculty affiliated with the Abess Center.

Her research explores how people process information and make decisions using eye tracking, facial expression analysis, and even brain activity recordings. Mormann has been designing sophisticated surveys and behavioral experiments to examine how people perceive the severity of climate change.

A paper she and co-authors Kenny Broad, School of Law professor Felix Mormann, her husband, and Annie Brett, a J.D./Ph.D. student at the Abess Center, recently submitted to a leading climate change journal investigates the impact on human perception of using the Celsius versus Fahrenheit temperature scale when trying to convey critical information about global warming.

It turns out that Celsius is not a particularly engaging or clear metric, yet the majority of scientific organizations and news media use it with regularity when discussing our planet's rising temperature.

"I'm European so Celsius means something to me, but many of my American friends don't understand it. It dawned on me that this lack of familiarity could change perception," she says. Mormann hopes that these and other behavioral findings will ultimately help policymakers develop and implement more effective communication and policy strategies for climate change and other pressing issues.

"Good science speaks to all stakeholders," she says. "We want to reach policymakers, federal agencies, the Intergovernmental Panel on Climate Change, influential reports, and the general public. How the whole discussion of climate change is framed could impact its perception and our motivation to address it."

"My work shows that learning about climate change is likely to be a slow process, and so the best strategy is to act now given the information we have," Kelly says.

Kelly's research, dating back to the late 1990s, has looked at which environmental regulation schemes are the least costly to comply with, what the carbon emission limits should be, and the effectiveness of adaptive strategies such as heat-resistant crops.

"My work shows that the U.S. agriculture industry can almost completely eliminate the harmful effects of climate change through adaptation," he says.

Creating effective renewable energy policies is also a complex endeavor, says Felix Mormann, associate professor in the School of Law and a scholar on the legal, policy, and economic challenges of adopting a sustainable energy future.

The challenge is only compounded by the fact that each state can create its own regulations, and that the Obama administration's Clean Power Plan "essentially just passes the baton onto the states," Mormann says.

A recent publication Mormann coauthored with a colleague from Stanford University and former UM student Victor Hanna, J.D. '14, analyzes and compares solar and wind policies and practices in California, Texas, and Germany to "gain insights into what has worked well—and what hasn't. We hope that this research will find its way into thoughtful policymaking and market mechanisms on both sides of the Atlantic."

Mormann, who has a joint appointment as a Faculty Fellow at Stanford's Steyer-Taylor Center for Energy Policy and Finance, notes that while the energy sector, which is inherently interstate in nature, lends itself to more federal regulation, and he is not optimistic that the U.S. will see that kind of reform any time soon.

Existing tax credits for solar panels, which could help reduce the nation's dependence on fossil-fuel burning power plants, are also problematic because they only benefit those with a large enough tax bill to offset.

Fossil fuels are still heavily subsidized, Mormann adds, so their true cost compared with renewables isn't entirely realistic, especially when factoring in the pricey toll on the environment.

"A lot has to do with price transparency in terms of cost. Right now, virtually all nonrenewable energy sources externalize their environmental costs," Mormann says, pointing to Miami Beach for example, where taxpayers are footing the bill to handle flooding caused by sea-level rise. "We don't have a carbon tax or cap-and-trade regime. None of this is priced in quite properly. Economic, environmental, and social sustainability all have to go hand in hand."

Mormann sees his greatest role in supporting a sustainable energy future as "pointing policymakers and other constituents to low-cost or, better yet, non-cost opportunities. There are ways to streamline processes that would improve outcomes while saving everybody time and money. To me, that's the low-hanging fruit. That is a really big contribution law and policy can make in this space."

Standing on the Front Lines

But as issues of policy progress, other areas related to the changing climate also need to be addressed.

"Sure, we can try to reduce carbon emissions, but there's an inertia in environmental systems that tells us it will take time for things to come back to what we used to have," College of Engineering Dean Jean-Pierre Bardet says. "Therefore, we have to be aware that we have to brace for adaptation."

Coral Gables Mayor Jim Cason is on the front lines of grappling with questions about adaptation. He has a favorite cartoon to illustrate. In it, two residents stand on a city street, waist-deep in water. One says, "I wonder when the city is going to do something about trash pits." To which the neighbor replies, "Don't hold your breath. I'm still waiting for them to do something about the traffic circles."

But with $13 billion to $15 billion worth of property and 47 miles of coastline in his city, Cason is trying to figure out how to give people a "bofetada," a smack to get them to wake up to the fact that sea-level rise is coming to their doorstep.

So far he has hosted workshops, commissioned the creation of sea-level elevation maps, attended Rising Tides Summits with fellow mayors from around the country, and written letters urging Florida presidential candidates to speak to their constituents to address the challenges of climate change and sea-level rise.

"You have to start with awareness," Cason says. "Short term we are okay, but the mortgage industry is going to say, 'Am I going to issue a mortgage that expires in 2046?' We need to have a dialogue, so we're just taking every opportunity to let people know that here's a range of risk that you need to manage in your own way."

South Florida is ground zero for rising seas and other climate change impacts. 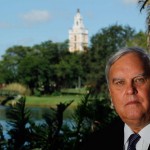 With an innovative and interdisciplinary focus, the Abess Center seeks answers to the … END_OF_DOCUMENT_TOKEN_TO_BE_REPLACED 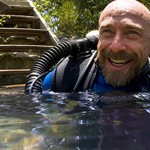 In the annual lecture series Sea Secrets, experts in a number of fields discuss topics … END_OF_DOCUMENT_TOKEN_TO_BE_REPLACED