Reducing the reliance on fossil fuels is the goal of UM researchers investigating renewable energy outlets.

Adam Braunschweig picks up a dry-erase marker and, on one of the glass shields in his chemistry lab, maps out the chains of carbon, nitrogen, hydrogen, and oxygen that make up his molecules for organic photovoltaics.

Beneath the shield sits a graduate student who is distilling a fluorescent pink liquid into an Erlenmeyer flask.

"Our lab is like a kitchen," says Braunschweig, assistant professor in the University of Miami's College of Arts and Sciences. "We cook molecules."

Of the 40 variations of a molecular structure Braunschweig's lab has been cooking, one in particular shows promise for revolutionizing the way the sun's power is harvested.

This is great news for the Sunshine State, where the urgency to find clean, renewable energy keeps rising—along with the sea levels that surround it.

According to the U.S. Energy Information Administration, more than 80 percent of the energy used in the United States comes from fossil fuels.

Electricity generation is the largest source of all greenhouse gas emissions in the United States, with transportation coming in at a close second. In Florida, most electricity comes from natural gas, which burns cleaner than coal but is still a fossil fuel that emits greenhouse gas.

Throughout the University of Miami, researchers are tackling the kilowatt conundrum from vastly different angles—all with the common goal of helping Florida, the nation, and the world reduce its risky reliance on fossil fuels.

The Clean Power Plan implemented by the Obama administration created the first-ever national standards to reduce carbon pollution from the power sector. It requires states to ensure that by 2030, their power plant emissions are 32 percent below 2005 levels.

But enforcement came to a halt in February 2016, when the U.S. Supreme Court granted a stay in response to a lawsuit from 29 states, including Florida, arguing the Environmental Protection Agency exceeded its authority in implementing the regulation.

The stay came just two months after the United States joined 195 other nations in the landmark Paris Agreement, signed during COP21, committing to limit global temperature rise to 2 degrees Celsius above pre-industrial levels.

"Let's just say that our standing in the international community with regard to climate policy has taken yet another hit," says Felix Mormann, associate professor in the School of Law and a scholar on the legal, policy, and economic challenges of adopting a sustainable energy future.

In Florida, renewable energy accounts for a mere 2.3 percent of net electricity generation (and most of that comes from biomass, not solar). The national average is 13.2 percent, and in Idaho it's nearly 85 percent, mostly from hydroelectric sources.

Florida has plenty of sunshine, but few homeowners can afford the upfront cost to install solar panels. And Florida is among a handful of states that prohibit any company other than a utility to sell electricity, blocking companies that install solar panels free and, in exchange, sell the solar power to the homeowner.

Unlike 29 other states, Florida does not have a renewable portfolio standard, which requires a specified percentage of the electricity utilities sell to be from renewable sources. The state does have access to the Property Assessed Clean Energy Program (PACE), which opens some doors to financing, but Mormann explains that lack of healthy competition in this area results in unattractive financing rates.

The good news is that global investment in renewable energy has been booming over the last ten years, reaching $270 billion in 2014.

Florida Power & Light (FPL), the third-largest electric utility in the nation, announced plans to build three additional solar energy centers in Florida in 2016 that will triple the amount of solar electricity it currently produces.

The quest for low-cost solar power is why Braunschweig is working hard to develop organic photovoltaic molecules. Unlike the bulky polycrystalline silicon panels we see splayed out on rooftops or solar farms, organic photovoltaic materials are light and flexible. They can be produced as a paper-thin film that's transportable and adaptable to numerous applications. They're also cheaper because installation and permitting of those heavy solar panels drives up the price.

"In Florida we have hurricanes, which means you have to make sure you don't have daggers of silicon flying around in a storm," Braunschweig says. The greatest challenge is the efficiency with which they convert sunlight to electricity. Right now, silicon-based panels operate at about 25 percent efficiency. Most organic materials are demonstrating less than 8 percent, though they have a theoretical efficiency of 33 percent. When solar conversion efficiency goes up, cost per kilowatt goes down. For Florida in particular, this would bring grid parity—the point at which the cost of renewable electricity is equal to or less than the cost of electricity from fossil fuels—within reach.

What makes Braunschweig's system of molecules unique is its ability to self-assemble into a helix, much like the way adenine, guanine, cytosine, and thymine form DNA.

This is significant because in their assembly process, the molecules form long strands that funnel the light-induced charges to electrodes, where the power can be obtained. The length of these strands, and therefore the distance the charge needs to travel to the electrodes, are factors in the material's conversion efficiency.

"The ability to make molecules is the ability to change matter atom by atom, and this gives you the power to solve problems," says Braunschweig, whose research is funded by the U.S. Army.

Why the Army? Imagine a camp in the desert run entirely on a solar device that can fold up into a backpack. While cheap solar power seems like the golden ticket, what happens when the sun doesn't shine?

"You can't store the electron as easily as you store water," says Jean-Pierre Bardet, dean of the College of Engineering and former director of the Urban Water Institute at the University of Texas at Arlington. Before that, he founded the University of Southern California's Megacities Center, which focused on preparing the world's largest cities for a sustainable future. "Water you can keep it in the pipes. Power you have to generate as users want it. There has to be a constant balance between the demand and the supply."

Several researchers throughout the University are investigating energy storage solutions, including alternatives to lithium-ion batteries. Bardet notes that through partnerships with FPL, College of Engineering students and faculty are designing ways to enhance grid stability. This becomes even more important as the number of renewable sources connecting to the grid increases.

A System in Motion

Miami-Dade County recently approached Bardet and the School of Architecture Dean Rodolphe el-Khoury to spearhead a partnership between the University and the county to explore resilience, in other words, "what can we do to create a community that will not be as vulnerable to the effect of sea level rise," Bardet explains.

The effort will tap into thought leaders and scientists from nearly every school and college.

"When you think of a city, it's a very complex entity with many different systems in place — transportation, health care, water distribution, power distribution, communications systems," Bardet says. "You have to look at the interdependency of the systems, and that requires quite a multidisciplinary approach. Engineers are systems thinkers."

Rethinking residential systems is something John Onyango does on a daily basis. The School of Architecture assistant professor is also a co-founder of ZEMCH (Zero-Energy Mass Custom Homes), an international organization that enables architects and scholars to share information on customizable homes that consume less energy than they produce on a net annual basis. ZEMCH holds an annual summit in Japan, which has amped up its focus on renewable energy following the 2011 Fukushima nuclear accident.

Onyango says zero-energy home designs are coming from companies like Panasonic and Toshiba, which build homes in addition to electronics.

Onyango and students have been working in the School of Architecture's studio to build "250-square-foot zero-energy microunits" that a Miami developer plans to use in zoning conversations with city officials.

Currently, 400 square feet is the minimum dwelling size, but smaller homes mean less energy and more affordability. Custom homes, which are built in factories and customizable to each customer's needs, save energy because they are sealed and insulated much more efficiently.

"Look at this door," Onyango says, pointing. "It was fixed on site; it has gaps. If it's custom made, it's done in the factory, sealed, and brought together as a unit. The problem is that in the U.S., people see custom homes as mobile homes. How do we convince people they have value?"

This summer, Onyango and students will be analyzing residential energy use in four zones in South Miami. They sent out letters to homeowners asking for access to their FPL data to find out how much they consume. In some cases they'll be setting up sensors to identify energy leaks. They're doing the same kinds of analysis in several buildings on the UM campus. The goal is to obtain data that will help retrofit buildings with energy-saving methods and technology.

All of these projects involve faculty from other disciplines.

One of the benefits of being a researcher at the University of Miami, which offers more than 180 academic programs, is the ability to collaborate with colleagues from many different disciplines.

Throughout the University, faculty scholars agree that the shift to a sustainable energy future is a multipronged effort that must include all of the following: education of the public and policymakers, smart energy conservation practices, and innovations in power and storage that are not only affordable, but also profitable.

As Bardet sees it, fixing the problem of climate change is much like a car: "If you fix something on a car but something else breaks, the car is still broken."

Adam Braunschweig, associate professor in the College of Arts and Sciences, works with graduate students in his chemistry lab. 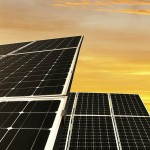 A College of Engineering associate professor is developing a prototype supercapacitor, a potential lightweight option to lithium-ion batteries. From mobile phones to electric cars, the rechargeable … END_OF_DOCUMENT_TOKEN_TO_BE_REPLACED A UM physicist proposes a longer-lasting, chemical-free ‘spin battery.’ Stewart Barnes has been collaborating with researchers in Japan for more than a decade to advance the field of “spintronics,” … END_OF_DOCUMENT_TOKEN_TO_BE_REPLACED