Scientists and researchers at the University of Miami are working to unlock the mysteries of the changing climate and what it means to South Florida.

Just before sunset on a picture-perfect South Florida evening, about a dozen members of a commercial real estate organization meet at the Rosenstiel School of Marine and Atmospheric Science for a tour.

They've come to the University of Miami to learn about sea-level rise, which in the not-so-distant future will diminish the value, desirability, and even habitability, of some of South Florida's most coveted real estate.

It is, in short, the biggest threat to their livelihoods and the most tangible consequence of the warming planet in South Florida, where sea levels have risen by about 9 inches since the 1950s and are expected to outpace the projected global average of up to 3 feet by the turn of the century.

As former Vice President Al Gore noted in a TED talk in Vancouver just the day before the group's visit, Miami is among the 10 most populous cities in the world most vulnerable to rising seas, but has the most to lose, more than $3.66 trillion in assets.

Leading the commercial brokers, bankers, and consultants up the catwalks of the Rosenstiel School's $15 million SUSTAIN (SUrge-STructure-Atmosphere INteraction) laboratory, Ben Kirtman, professor of atmospheric sciences, says the 38,000-gallon wind-and-wave tank that can simulate a category 5 hurricane will one day answer the question that has long vexed forecasters: How can they predict which hurricanes will suddenly and rapidly strengthen?

"The reason we're so bad at understanding and predicting intensity," Kirtman tells the group, "is we don't have a really good idea of how the ocean and the atmosphere transfer energy at the air-sea interface."

Understanding how the oceans and atmosphere drive the world's climate is immensely complicated. The sea and air are in perpetual motion. Like giant moving puzzles, each has innumerable interlocking parts. Understanding what each piece does, what it did in the past, how it varies naturally, how it's changing with rising global air and sea temperatures, and how it will affect sea levels in a particular place is even more difficult.

As Kirtman says, "It is harder than rocket science."

But translating what the global science of climate change means to South Florida is the next frontier for researchers at the Rosenstiel School and across the University who, through fieldwork and climate modeling, are unraveling the fundamental physical, biological, chemical, geological, and social processes that determine global climate and how human activity is altering it.

With more than $40 million in federal annual grants, more than half from the National Oceanic and Atmospheric Administration, they are tracking, measuring, and analyzing changes in water vapor, clouds, rainfall, hurricanes, melting ice sheets, and most critically, the heat content, circulation, and biogeochemistry of the ocean from the surface to its deepest depths.

They are scrutinizing African dust in ancient Bahamian limestone deposits, measuring shifting terrain atop South American volcanoes and in the Everglades, mapping coastlines with high-frequency radar, monitoring changes in oceanic heat transport across the vast North Atlantic, deploying drifters and moorings off the coast of southern Africa, and nurturing super corals that, one day, could thrive in more acidic seas.

Aided by unique resources like the SUSTAIN lab, the satellite-data collection Center for Southeastern Tropical Advanced Remote Sensing (CSTARS), the research vessel F.G. Walton Smith, and the Helicopter Observation Platform, a flying laboratory capable of skimming the sea surface, they are beginning to translate global data into local predictions that can help policymakers, planners, and the public prepare for and adapt to rising seas, intruding salt water, less-but-more-intense rainfall, and other alarming trends climate change is bringing to their backyard.

"We need to make that translation—understanding what the global sea rise means for Miami and surrounding areas," says Dean Roni Avissar. "That's the next big challenge in science and that's where Rosenstiel is particularly well-equipped to provide leadership at the University of Miami and in the community. But we are in the infancy of that. Everything we do in terms of predicting the climate is limited by the size of the supercomputer we can use. The more regional you want to go the bigger the supercomputer you need."

Pieces of the Puzzle

For decades, the primary cause of rising seas was thermal expansion. As water in the ocean warmed, it expanded, so it took up more space. Then in the 1990s, when Greenland and Antarctic ice began visibly melting, sea levels rose more. Now, research shows, changes in large-scale ocean circulation may be playing an increasing role, which given its proximity to the mighty Gulf Stream, is critical for a state like Florida to understand—and very worrisome to Kirtman.

"The Gulf Stream really affects sea level here," said Kirtman, an expert in short- and mid-term forecasts who, with invaluable help from the Center for Computational Science, has developed the highest-resolution, global ocean-and-atmosphere simulation of the Gulf Stream.

But the Gulf Stream does not act alone. It is but one piece of the puzzle, a single strand in a complex web of oceanic conveyer belts that moves enormous quantities of fresh water and heat from the tropics to northern latitudes. There, the heat is released into the atmosphere and the saltier waters sink, overturning in the depths, and flowing back south under the Gulf Stream. Known as the Atlantic Meridional Overturning Circulation, or AMOC, it is one of the primary determinants of our climate.

Oceanographer Lisa Beal, Rosentiel's associate dean of research and professor of ocean sciences, is studying how changes in one of Earth's least-explored and most dynamic currents, the Indian Ocean's Agulhas, may be disrupting the AMOC.

Flowing south along Africa's east coast to the southern tip of the continent, the Agulhas reverses direction in an abrupt, hairpin turn south of the Cape of Good Hope. Though half a world away, increased leakage of the Agulhas' warmer and saltier waters into the Atlantic at that turn may be altering the vital heat balance of the Atlantic, with repercussions for climate and sea level around the U.S. and Europe.

"Evidence from the models and observations show that western boundary currents are at the heart of climate change," Beal says, "because they are the fastest warming areas of the ocean. The question is why and what does that mean for us?"

The Good and the Bad

Those two questions consume Amy Clement, associate dean and professor of atmospheric science. As a member of the Rosenstiel School’s elite climate modeling group, she attempts to predict the future of a warming planet by studying the wide range of climate variability that naturally occurred in the past.

“If you’re a water manager in Florida, you needed to know this past January would be the wettest January on record because of El Niño,” Clement said, referring to the warming of the natural ocean cycle that periodically disrupts “normal” weather patterns around the world. “Ultimately that’s our goal—to give people information that is regionally appropriate, on a scale that actually matters to them.”

Fellow climate modeler and atmospheric scientist Brian Soden's research on how warming trends will affect extreme weather events like hurricanes has brought a sliver of good news to Florida. From his modeling, he doesn't expect warming trends to intensify hurricanes in the Atlantic. But with rising seas, he sees unprecedented storm-surge flooding in southeast Florida.

"In 1992, Hurricane Andrew was just a wind event because the ridge along the east coast limited the inundation from storm surge," Soden said. "But, add three feet of sea level to that same storm, and our topography can't help. Two-thirds of Dade County will be inundated, and there will be nothing to stop it."

For now, the Southeast Florida Regional Climate Change Compact, which is developing strategies for nuisance flooding, saltwater intrusion into freshwater supplies, and land subsidence that is already affecting cities like Miami Beach, relies on global projections to predict future sea-level rise in Monroe, Miami-Dade, Broward, and Palm Beach counties. The picture those projections paint for a region that sits on a porous limestone bed are as uncertain as they are unsettling.

Over the next 15 years—half the time of the average mortgage cycle—South Florida waters are projected to rise another 3 to 5 inches, on top of the 3 inches they've already risen over the past 15 years. Mid-term and long-term projections are even scarier: between 11 and 22 inches of additional sea level rise by 2060, and between 28 and 57 inches—about the height of a car—by 2100.

The widening ranges in the longer-term estimates are due, in part, to uncertainties about how much and fast ice sheets will continue to melt and whether humans dramatically reduce their output of greenhouse gases, which, trapped in the atmosphere, are causing Earth to warm.

In 1995, when Harold Wanless, professor and chair of the Department of Geological Science in the College of Arts and Sciences, began sharing the mounting scientific evidence that human activity was responsible for the warming trends, he was ridiculed. "Business people yelled at me," recalls Wanless. "Some scientists thought I was wacko."

Today, there is no credible scientific debate.

The latest report of the United Nations-supported Intergovernmental Panel on Climate Change (IPCC), for which Kirtman and Soden served as authors, unequivocally concludes that increased greenhouse gases, primarily carbon dioxide (CO2) from the fossil fuels we burn to power our lives and lifestyles, is the cause of the warming planet.

The evidence is overwhelming: in addition to melting ice sheets, land, air, and sea surface temperatures are increasing. Mountain glaciers are retreating. Permafrost is thawing. Droughts, torrential rainfalls, and heat waves are intensifying.

And the oceans are absorbing huge amounts of CO2—more than 40 percent of what's been released into the atmosphere since the onset of the Industrial Revolution, according to the IPCC. Initially, scientists thought oceanic uptake of CO2 was good. After all, by removing CO2 from the atmosphere, the ocean is actually slowing climate change.

But the ocean is also growing more acidic, at great cost to sea life, particularly to shellfish and coral reefs, which are vital to Florida's tourism economy, fisheries, and coastal protection. With rising CO2 concentrations, the pH of the ocean is falling, stressing, bleaching, and killing coral in record numbers.

Chris Langdon, chair of the Department of Marine Biology and Ecology, who published the first paper showing the importance of pH levels to the health of coral skeletons, and associate professor Andrew Baker, who demonstrated that corals can swap their algal partners to protect them from bleaching, are nurturing more heat- and acid-resistant corals.

Their goal is to restore the health of stressed reefs by replanting them with hardier stalks that will continue providing essential fish habitats and coastal fortification—and buy time for a global solution to rising CO2 levels.

"I am relatively confident that, with all our ingenuity, we will one day find a way to remove carbon from our atmosphere," Baker says. "But until then, we have to protect our reefs. They will help protect us from storm surge that will get worse with sea-level rise."

As Kirtman leads the real estate professionals down the SUSTAIN catwalk, he expresses similar optimism about the future. "There is no question in my mind it is doable," he says. "But how we get there is open for discussion. Our job at the University is to provide the very best information possible to the people who are making those decisions."

Lisa Beal, Rosenstiel School's associate dean for research, is studying the Indian Ocean's Agulhas current, which is leaking saltier and warmer waters into the Atlantic Ocean, with potential impacts on climate in the U.S. and Europe. Learn more and view complete video. Video credit: Valery Lyman. 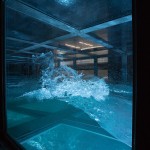 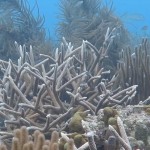 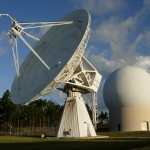 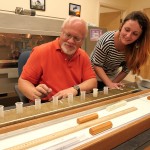 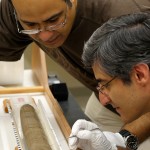